On March 8th 1966 Louis Wichinsky filed a patent for a “Dough Kneading Machine for the Forming of a Bagel and the Like.”

His patent was granted on October 29th 1968. Check out the actual historical documents from the United States Patent Office below!

About New York; And He Can Get His Oil Changed at Any Grocer's

Finally, 22 years ago, he succeeded, only to find that a man named Louis Gender was awarded a patent for the same machine in 1904. Nevertheless, on the strength of one difference in the two inventions, a kneading plate, Mr. Wichinsky got his own patent and set to work proving to the world he could turn out 600 dozen bagels an hour.... 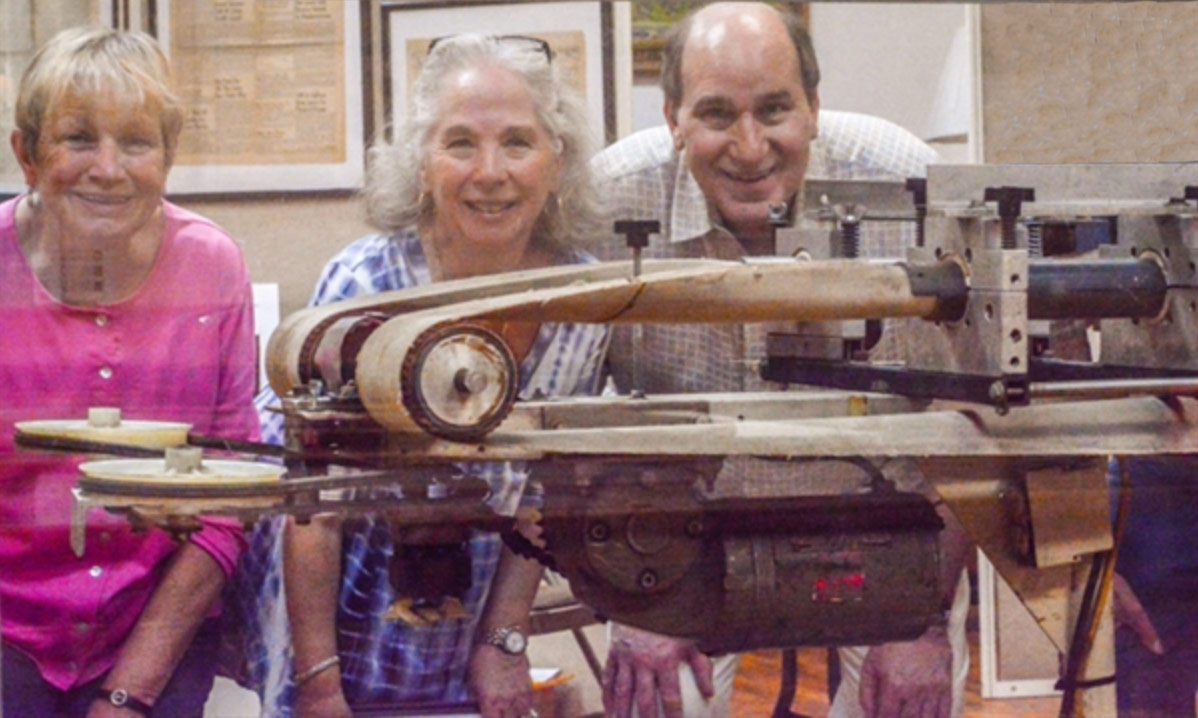 On November 20, 2012, the Village of Monticello Board of Trustees and the Town Board of The Town of Thompson issued an Official Proclamation that Monticello, NY is “The Bagel Capital.” We proclaim this in honor of its culture, history, and people. You have and will inspire this world forever because of your unique trend setting achievements and creativity in the bagel realm. 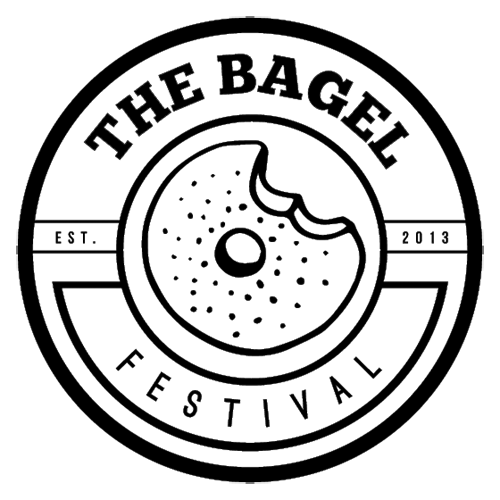 ...The village is home to the Monticello Bagel Bakery, a local landmark on Broadway opened by the late Ed Fleischman and his wife, Anne, in 1967, and now a third-generation family business. The bakery makes an average 25,000 bagels a week. But Siegel said the real reason that Monticello takes the bagel crown comes from an obscure bit of history...

Siegel is determined to give Monticello a new identity thanks to Wichinsky’s invention. Siegel, a founding member in the Monticello Business Association, has organized a bagel festival... 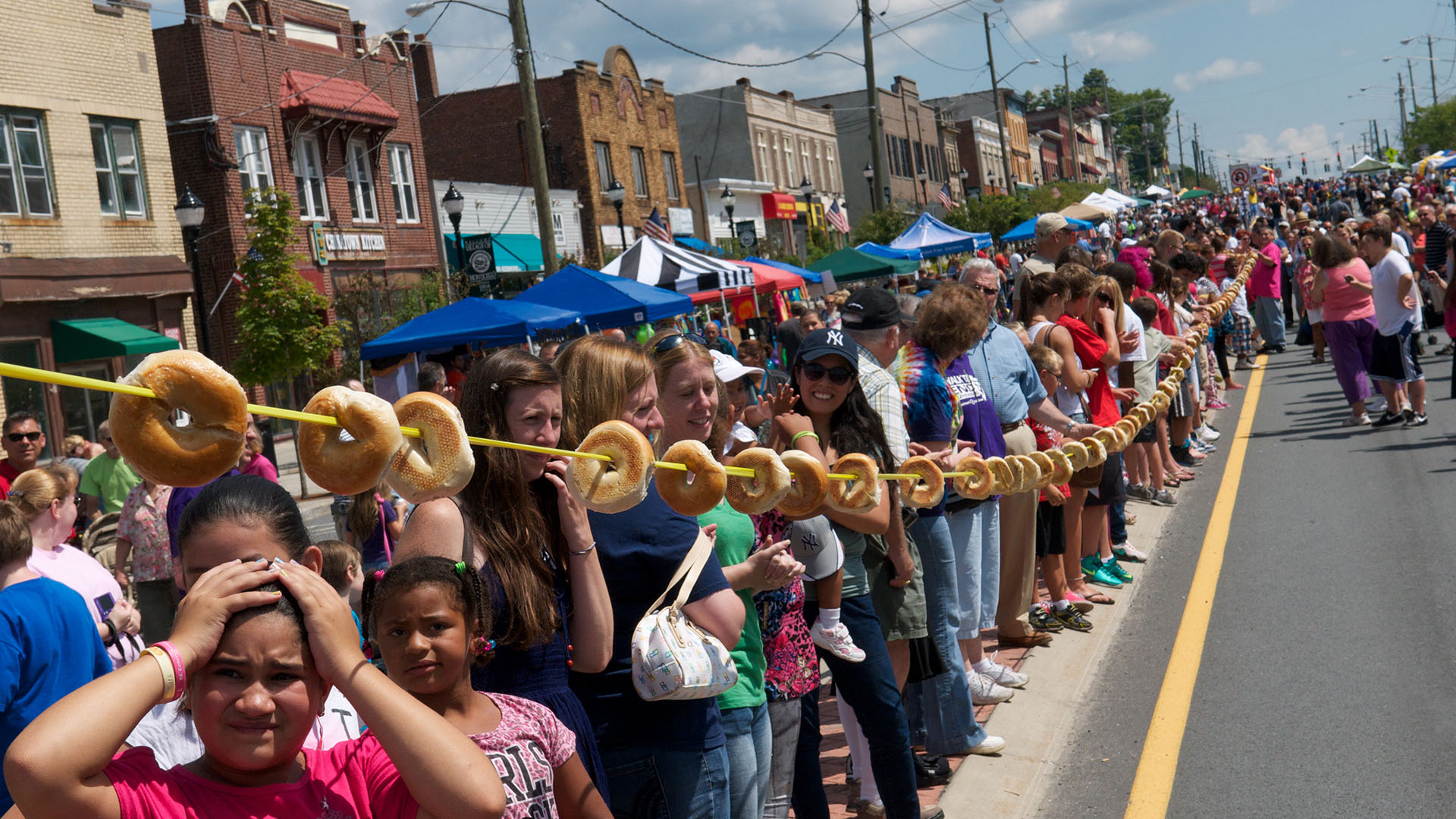 Striving to get into the Guinness Book of World Records for producing the longest continuous bagel chain of locally baked bagels.

The New York State Senate and Assembly have passed a resolution proclaiming that Monticello, NY is “The Bagel Capital.”

History and Value of the Bagel Festival

Here’s an excerpt from a recent article/interview between Andrew Moran of ResortsandLodges.com and Jeffrey Siegel, founder of the Bagel Festival:

“Monticello New York, the birthplace of the bagel, and official bagel capital of the world, is becoming known not only for the quaint charm of the town, but for the annual Bagel Festival. That’s right, Bagel Festival. The world wide food commodity has become the centerpiece of an annual event in New York’s Catskills, and a piece of the pride and joy of a community. With over 5,000 attendees at the 1st event last year, crowds are expected to triple this August, to over 15,000.”

“I had the chance to talk with Jeff Siegel, the mastermind behind the Bagel Festival, and locally born and raised member of the community. I asked Jeff how such a festival came to be, what the festival is like today, and what a nationally recognized weekend means to a community like Monticello.”

Part of the Bagel Triathlon.

Can Bagels Save a Struggling Upstate New York Town?

We built this city on lox and roll

...In Monticello, the Bagel Festival isn’t just a quirky celebration, but an attempt at economic salvation. For decades, the village thrived alongside the Borscht Belt hotels catering to middle-class Jewish vacationers from New York City. But when air and cruise travel became more affordable in the 1960s, the hotels started closing one by one, and Monticello, along with other towns in Orange, Ulster, and Sullivan counties, suffered... 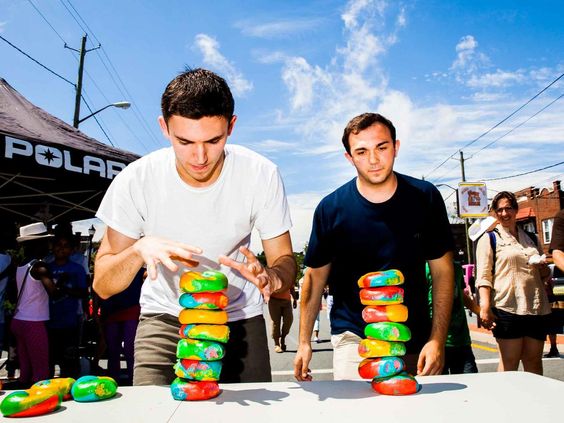 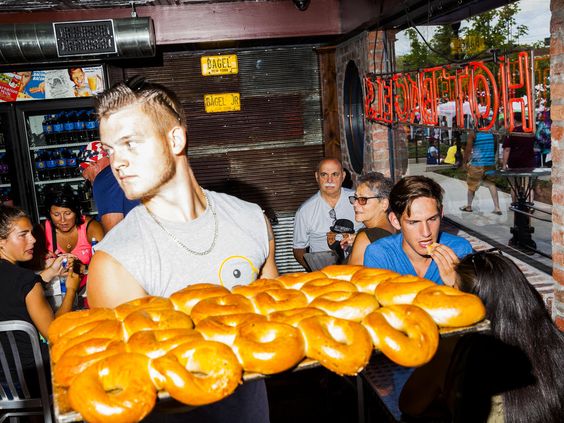